Is it true that most rattlesnake bites involve young men?

Is it true that most of the time, rattlesnake bites involve young men?

To learn the answer, at least for my home state of Arizona, colleagues and I sampled three years’ worth of records from the Arizona Poison and Drug Information Center, by pulling out the record of every third case of rattlesnake bite. That process resulted in records of 150 bites. We eliminated 22 cases because they were incomplete.

Here’s what we learned from the remaining 128 cases: 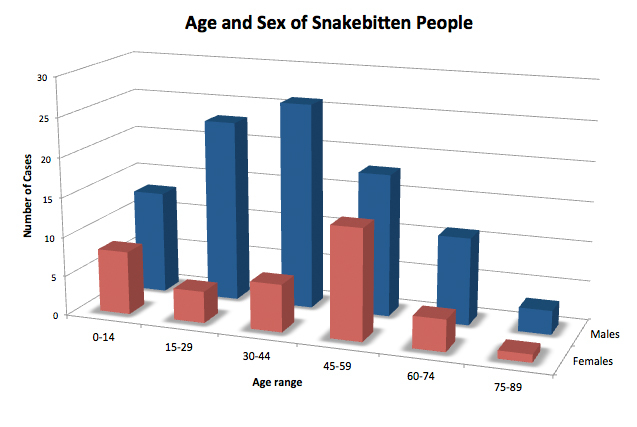 It turns out that the peak age for men is a bit older than commonly believed – and older still for women! In fact, contrary to what many people expect, only 18% of our cases were men 15-29 years of age. Hmm. What if we make this same graph, only we eliminate all of the foot and leg bite cases (45% of the total)? Now the graph looks different: 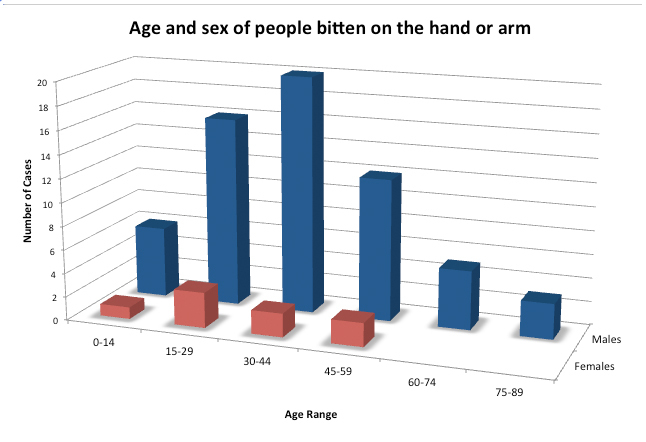 It is safe to say that rattlesnake bites on the hand are primarily a problem for males, not females – at least in Arizona. But even so, only 23% are young men, ages 15-29.

Note: these data were originally presented at the Biology of the Rattlesnakes conference in Loma Linda, California, in 2005.