Who gets bitten on the hand or on the foot?

Do rattlesnake bites affect men and women the same way?

In a previous article, I described a study of rattlesnake bites in Arizona, which showed some differences between men and women. Men were bitten more often than women, and at a younger age. Today, I’ll break down the same study’s data by month of the year, to illustrate a fascinating difference between rattlesnake bites on the hand and on the foot.

First, here is what happens in Arizona, with what are commonly regarded as “accidental” snakebites. Most bites involving the foot (or, rarely, higher up on the leg) happen when the person did not see the snake in time to avoid being bitten. Our database shows these are cases where people were taking out the trash, getting in and out of cars, walking among low vegetation in the desert, or standing in the yard but paying more attention to a wine glass than to their feet. 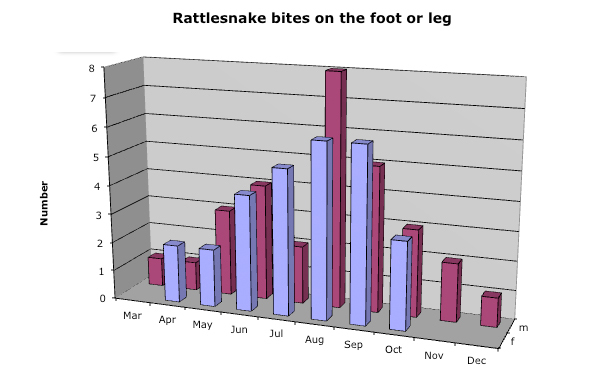 Two things here are remarkable: one, that – within the error of random sampling – men and women show pretty much the same pattern. And two, that rattlesnake bites in Arizona happen during the time of year when snakes are active outdoors. This should be no surprise, when you think about it: people all walk across our yards and get in and out of cars; and you can’t get bitten doing that unless there’s a snake nearby.

But now, take a look at the same kind of graph as applied to bites on the hand. Please note that two thirds of these cases involved fingers, especially the thumb and index finger, and that only one case was higher than the wrist. (In that case, a teenaged girl bitten on the arm, the snake was resting in a bag of dog food.) 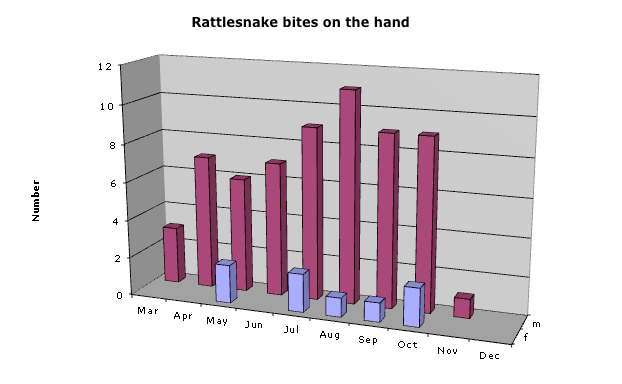 Risk of hand bite included gardening, clearing woodpiles, handling “dead” rattlesnakes found on the road or attacked by humans in the yard, or attempting to move live rattlesnakes out of harm’s way. Several were occupationally at risk: sheep herder, snake priest, groundskeeper. At least ten percent of this group were drunk at the time of the bite.

What this means to me, as a doctor, is that rattlesnake bite is really two diseases:

Foot and ankle bite is an accidental condition, for which people who live near nature are at risk. Such people need to be aware of the risk, to wear proper shoes, and to look at the path in front of them even if that means using a flashlight or putting the garbage can down for a moment. Foot bites result in relatively little long-term functional damage (by which I mean the person recovers pretty well and can still walk okay, most of the time); but when considering longer-term problems such as a swollen foot, it is important to study and plan treatments for both sexes and all ages.

Finger and hand bite is a predominantly male condition, and the time of year at which men are at risk is not patterned the same as surface activity of snakes. These bites are brought about in large part by modifiable human behavior, and a sub-group of individuals at particular risk can be identified and targeted for prevention. Hand bites are especially important medically because they are more prone to result in permanent disability, such as loss of a finger, loss of strength or decreased mobility. Medical research and treatment planning for this group needs to take into consideration the occupational health needs particularly of this subgroup of men.