My dad is retired now; but John T. Boyer, MD was a practicing and very well regarded geriatrician when I first showed him the analysis in my previous “Men, Women and Snakes” posts. In the “Age and Sex of Snakebitten People” graph, the greatest difference between the sexes happened between 15 and 44 years of age; and after age 60 both sexes showed a decline in numbers of snakebites. Considering seasonal variation in foot bites, men and women looked exactly the same; but for hand bites the differences were so great that we couldn’t help laughing when we compared the two graphs.

I told Dad that most people accepted that snakebite was a “young man’s disease,” but that my analysis showed that snakebite on the foot was about equal for men and women. I thought that in the future it would be important to pay more attention to the pattern of snakebite in women. We didn’t hear so much about old folks getting bitten, but I suspected those cases were mostly foot bites, too, because after age 60 people probably didn’t go out picking up snakes very often.

Dad told me I had a young person’s conceit and that I should think again about my attitude. He was willing to concede that older people spent more time indoors, away from snakes; so the overall decrease in numbers made sense. However, I had better think again about sex differences. Based on his experience in the practice of geriatrics, men and women remain distinctly men and women, for as long as we all live.

To settle the matter, we went back to the original case records and dug out every case involving a person aged 60 or older. There were 50 cases, including 16 women and 34 men.

First, we looked at the month of the year when old folks were most likely to get bitten. The “all ages” graph had shown a peak in mid-summer, coinciding with “snake season,” but it turned out that people over 60 were different. Old people, it seems, do not encounter snakes so much during Arizona’s hottest months. “Elder season,” when snakes are more likely to encounter humans over 60 in the desert, appeared to occur once in spring and again in fall. 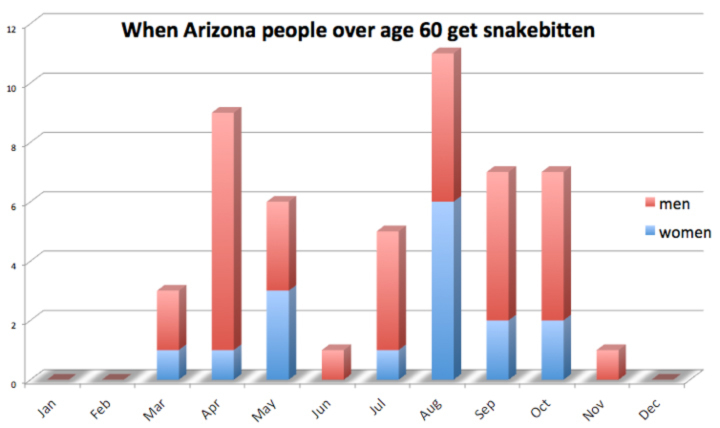 That was pretty interesting! To me, it suggested that older Arizonans were more likely to go for a walk when the weather was pleasant. So I made another chart, this one showing the time of day when foot bites happened: 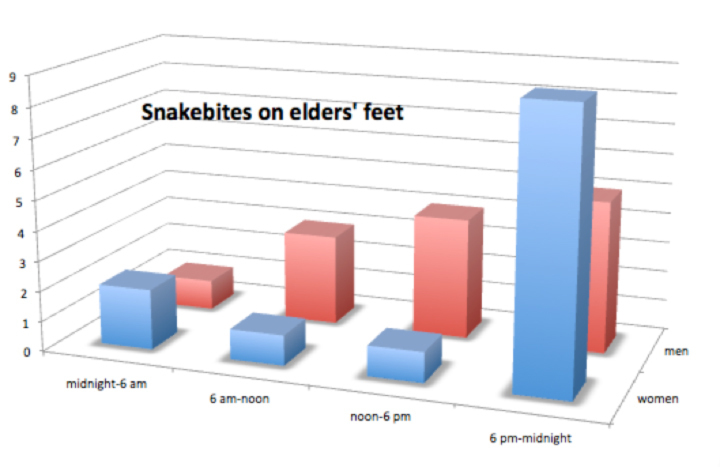 Hmm. Maybe some male-female differences were apparent here, but with so few cases it was hard to say for sure. Either way, it seemed that a large proportion of snakebites were accidents in the evening, which is both a pleasant time to walk in the desert and a difficult time to spot a snake on the ground. At the very least, women over 60 were most likely to be bitten on the foot during the darker hours of the evening and night.

What about bites on the hand? Well, here’s where Dad really won the argument. The sun was out when these snakebites happened, and – just as for younger folks – bites on the hand were predominantly a male phenomenon. These old guys saw the rattlesnake. They knew exactly what they were doing. And they reached for it. 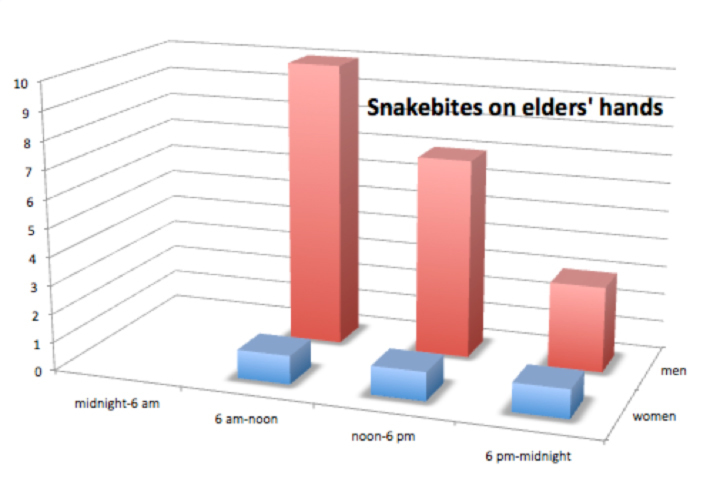 Time to settle the matter of aging and sex differences, though. What happens to the proportion of bites on the hand and on the foot, as people age? Surely, there comes an age when nobody is actually reaching to pick up a rattlesnake?

But no. I was wrong, and my father the geriatrician was absolutely right on this one: women are women, and men are men, no matter how old we become. I’ll leave you with one last graph – and vive la différence. 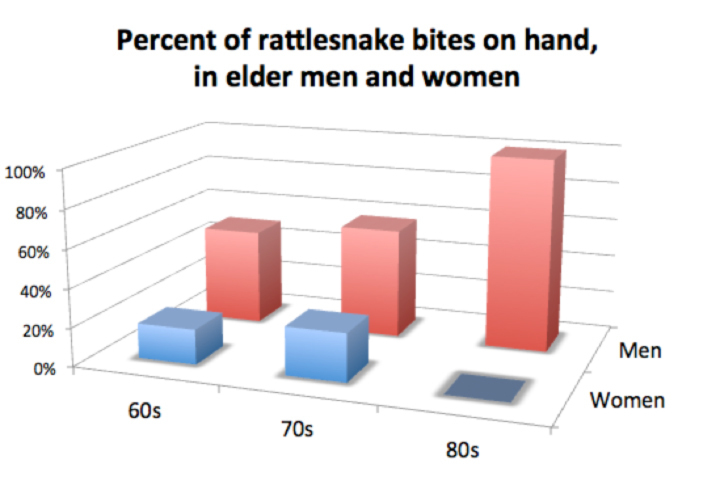