The Venom Interviews comes to life

Follow-up to Part 2 of Thinking Outside the Quotes

Not long ago I posted a 2-part story, titled Thinking Outside the Quotes, about being the expert featured in a media article. Sharing one's work with reporters is a heady experience, for sure: the media can magnify an important message in a way that is inaccessible to a lone academician. Wide exposure for a project one has worked on for years can be very satisfying, or timely intervention in a public crisis can benefit everyone concerned.

Unfortunately, a lazy or unscrupulous journalist or video producer will sometimes write a story before doing the associated interviews. He or she may bait a scientist or physician by asking the same question multiple ways, until a juicy quote is produced, and the resulting story may become a professional embarrassment to the interviewee. Or worse: the reporter may leave, choosing instead to rely on false "experts"who willingly sensationalize a story for wider distribution as entertainment; and the misinformation may cause harm in a variety of ways. And so it is that a day hardly goes by for me, without my social media newsfeed including at least one fierce tirade by a biologist or venom expert who is sick of misleading documentaries on snakes.

Today, though, I am delighted to share a link to the unusual documentary that I described in the second part of Thinking Outside the Quotes. The Venom Interviews is finally complete after nearly 5 years in production. All indications are that this program will tell its story in the actual words of venomous reptile experts, not only in the artfully edited format of the basic video but also in hours of appended archival materials.

If the preliminary indicators in my newsfeed prove correct, The Venom Interviews will also have a more lasting impact than most venomous animal videos, by providing teachers, scientists, and up-and-coming herpetologists with a resource like no other. Similar to the venomous snake experts in his production, creator Ray Morgan has extracted the most interesting material from his subjects, he has curated it with care, and now he's ready to share it with the world. 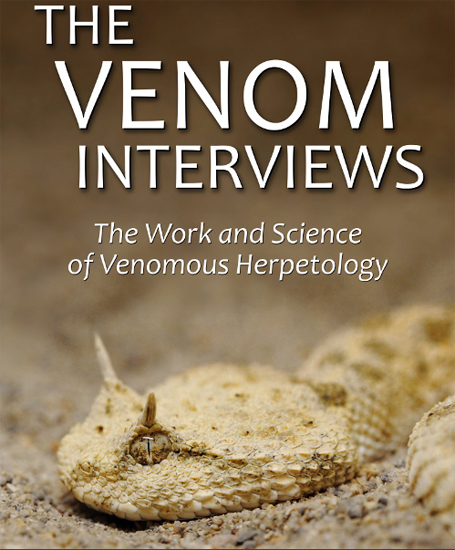